I was sitting on the couch in the front room yesterday when I recieved the following text out of the blue from my wife. 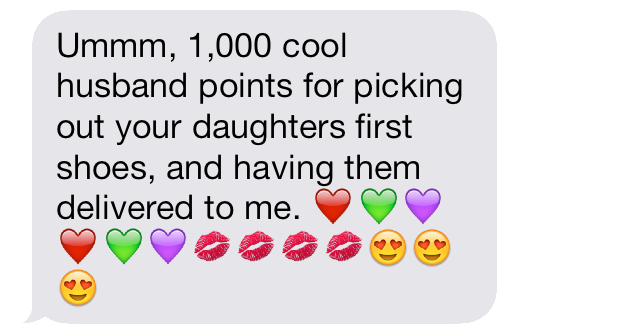 I don't remember precisely what I was doing when the message came in, but the odds are good that I was watching an episode of Burn Notice. The point, though, is that I was caught completely off guard with the request.

It took me a minute to reply.

We are both excited by the imminent arrival of our first daughter in mid-March. I wasn't sure why my wife was entrusting to me the task of buying her first pair of shoes, but her message made it seem like she was pretty excited about the idea. To be honest, it made me feel special to be specifically included in a task that I normally wouldn't have any confidence in doing "right". This was especially true because I'm feeling so disconnected from them right now: my wife and sons flew back to the US two weeks ago, and I won't be joining them for another 4 weeks.

And, besides, who am I to turn down cool points from my favorite person?

Getting Used to the Idea

Then I realized that it would be counter-productive to just blindly ask questions. I should look at what is available first. I should look more closely at the pictures that I've seen of clothes that my wife has already bought. I could ask more informed questions later. I didn't want to shirk on my newly assigned duty, after all.

So I would agree, do my research, ask her opinion later if needed, and then buy some shoes online to have shipped to her.

In texting, "OK" sometimes seems like too a curt reply. It's fine for a request to pick up milk or bread on the way home, but I wanted to communicate that not only was I okay with the request but that I also appreciated being asked; in fact, I wanted to focus primarily on that. So:

Vantage Points (An Aside)

Imagine that you and an enemy with a gun are traveling in a transport plane, and that the enemy, standing at the front of the cargo area, shoots at you where you are standing at the back of the vehicle. From your viewpoint, a bullet just shot into your bullet-proof vest (because you were prepared). It seems pretty clear-cut.

But now imagine that the vehicle is traveling fast, and not just fast, but faster than the bullet can shoot out of the gun. The bullet would come out of the gun moving away from you. Unfortunately, it won't be moving fast enough. A high-speed camera on the ground would catch an image of your body slamming forward into the bullet.[1]

In retrospect, my surprise at the request should have tipped me off. Throughout the day, we continued to text back and forth about other random things, like we normally do, and I went to bed none the wiser to what the astute reader may have already guessed: I sent an ambiguous reply to a completely misinterpreted message.

Somewhere about 1:00 AM my time (this would be 6-ish her time), my wife posted a public thank you to me on FaceBook, awarding me 1000 awesome points for having picked out and shipped our daughter's first pair of shoes.

Her text woke me at about 1:40 AM. She was genuinely confused. Why had I taken taken credit for buying shoes that I hadn't bought?

I had just learned that the shoes existed, so I couldn't have taken credit on purpose. I felt amused and a little let down. Now it all made since. I told her what I had thought, and she told me what she had meant. I said that I had planned to shop the next day.

Then she told me about the public post for all of our friends and family to read and about the private message from her friend who had actually bought the shoes. My amusement faded.

Both of us had, in spite of actions being out-of-character, attributed something positive to the other. Both of us were let down. I had also caused her to publicly make a false statement that took credit away from her generous friend.

Situations like this arise from time to time in relationships. It's like suddenly finding yourself and your partner standing in a wooden room full dry kindling, each holding a lit match. A wrong word, an incorrect attribution of intent, a failure to overcome a bruised ego: any one of these things could spark a firestorm. Every couple has their own dynamic, but whatever the means, both of you must care very much about to extricating yourselves without causing damage.

I'm proud to say that we made it.

And somebody owes his wife flowers.

[1] This half-remembered story comes from a too-long-ago reading of Time: A Traveler's Guide.

https://Remeter.org: the general idea is to think about money in terms of what comes in and what goes out.

Just a quick note to say that I've restored my blog presence. Much of this content, maybe all, is from a number of iterations ago, versions of me that I identify with but who are no longer me. I'm leaving it mostly untouched.

Cilador Weaver v0.1.5, a Fody addin for writing custom mixins in C#, is now available via NuGet and direct source and binary download.[1] If you're a C# developer, please test it and provide feedback :-) Cilador Weaver was formerly known as Bix.Mixers This release addresses a